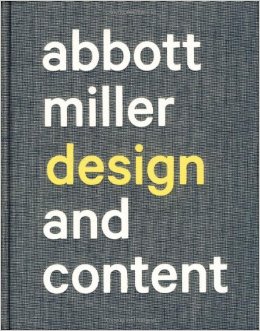 "Open Book is the first monograph on the preeminent graphic designer Abbott Miller. Recipient of numerous design honors including the Chrysler Award for Innovation in Design, Miller is known for his pioneering graphic work as a partner at Pentagram, where he leads a team designing books, magazines, catalogs, identities, exhibitions, and creating editorial projects. His work is often concerned with the cultural role of design and the public life of the written word. Collaborating with performers, curators, artists, photographers, writers, publishers, corporations, and institutions, he has created a unique practice that crosses back and forth between the printed page and the physical space of exhibitions. In his work as a designer, editor, and writer he has pioneered the concept of the designer as author, and he has collaborated with artists such as Matthew Barney, Yoko Ono, Geoffrey Beene, Philip Glass, Twyla Tharp, and Nam June Paik, among many others. His clients include Vitra, Knoll, Harley-Davidson, and Steuben, as well as many museums and publishers.

Miller presents his work as a catalog of design strategies, emerging from the unique circumstances of form and content. In four chapters "Books," "Exhibitions," "Magazines," and "Identity" Open Book provides insight into Miller's working process and showcases all of his best designs. Miller talks freely about influences on his practice, his ideas, his experiences working with curators, artists, and clients, as well as the lessons has learned. A foreword by Ellen Lupton situates his work in the context of contemporary design. Open Book, beautifully produced and illustrated with more than four hundred images, is a must-have for anyone interested in design and the visual arts".