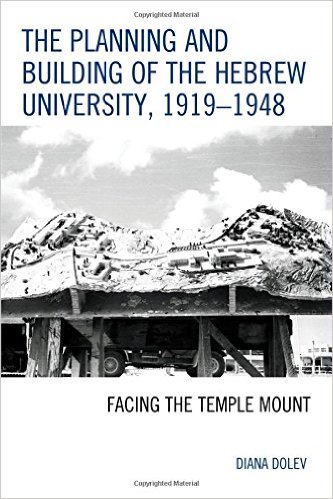 Since the construction of the first Holy Temple on Mount Moriah in Jerusalem in 957 BCE, the site became one of the holiest places for Jews, Christians, and Muslims around the world. Once the Dome of the Rock was built during early Islam, the edifice replaced the temple and for centuries pilgrims, travelers, and locals would climb up to the Mount Scopus summit for the magnificent view it afforded. Hence, planning and building an institute of national importance on Mount Scopus could not disregard the implications of that view of the Temple Mount—in terms of beauty, religious sentiments, and the link to a historic golden age.

The Planning and Building of the Hebrew University, 1919–1948: Facing the Temple Mount traces, for the first time, the history of the construction of this highly significant Zionist enterprise. It follows the years of the British Mandate rule over Palestine, bookended between the Ottoman Empire government and Israel's independence—an era of great changes in the area, Jerusalem in particular. In the three decades between 1919 and 1948, five different master plans were drawn up for the university, though none of them were fully implemented. Only seven buildings were designed and fully completed. Each plan and building presented an interpretation of a university conception that also related to prevailing styles and ideological trends. Underlying each one were intricate power struggles, donors' wishes, and architectural concerns. Internationally famous town-planners and architects such as Patrick Geddes and Erich Mendelsohn took part in designing the campus. The book also reveals comparatively unknown architects and their contribution to the campus.

The self-portrait: a cultural history